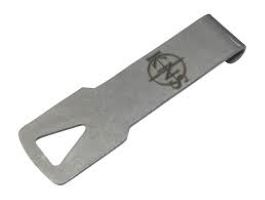 The Bureau of Alcohol, Tobacco, and Firearms has arrested a Florida man for selling a piece of metal engraved with the outline of a “lightning link” that turns a semi-automatic AR-15 into a fully automatic machine gun.

The ATF’s move comes alongside a similar crackdown on 80-percent receivers and an ongoing debate about the legality of 3D-printed guns. In each case, federal regulators have made contradictory and unilateral decisions about the point at which a piece of metal or plastic becomes a regulated firearm or accessory.

Kristopher J. Ervin, 40, was arrested March 2 and indicted Thursday on a charge of possessing an unregistered machine-gun conversion device, according to the Florida Times-Union.

Ervin sold metal, credit-card-sized cards that had been laser engraved with the outline of a lightning link. Some of the cards also doubled as bottle openers, according to this page accessed by GunsAmerica. The AutoKeyCard 3in1 with Bottle Opener sold for $109.

The product description directs users, “Do not cut or alter artwork in any way” and describes the item as a “Business Logo Card, Great Conversation Piece, Artwork and Novelty.”

In the Terms of Service posted on autokeycards.com, the company tells its customers, “You may not use our products for any illegal or unauthorized purpose nor may you, in the use of the Service, violate any laws in your jurisdiction.”

None of this was enough to protect Erwin from prosecution. It is a violation of federal law to manufacture, receive, transport, and/or deliver a machinegun not registered in the National Firearms Registration and Transfer Record, the agency noted in a statement about this case.

The ATF argues that Ervin’s products violate this statute because users could cut out the metal along the engraved lines and use that device to convert an AR-15 into a machine gun.

Anyone in possession of one of Ervin’s products is in violation of federal law and could face up to 10 years in prison and a fine of up to $250,000 per count, the ATF claims. It isn’t clear whether someone could face prosecution even if they hadn’t cut out the lightning link.

The ATF is prosecuting a similar case against a man who sold what the agency claims are full-auto AR-15 sears disguised as “wall hangers.”

This case also shares similarities with both the 80-percent receiver controversy and the debates surrounding 3D-printed guns. In the 80-percent receiver cases, pro-gun advocates have argued that the ATF has incorrectly (and inconsistently) defined an unfinished piece of metal as a firearm receiver. As in the AutoKeyCard case, the ATF hasn’t clearly communicated at what point a metal block has been machined to the point of becoming a firearm.

AutoKeyCards also share similarities with the designs for 3D-printed guns. State attorneys general have tried to ban 3D-printed gun designs from being posted online, but gun rights advocates have argued that those designs are protected speech. A similar case could be made for AutoKeyCards because they are, essentially, a product design engraved into a piece of metal.